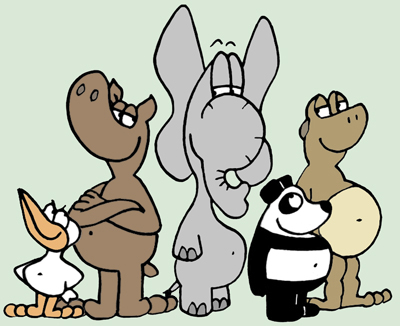 I began putting the series on the Web in 2002, with daily black & white strips. I now call that era E&A Classic. It became the first chapter of E&A as a web comic, of eight chapters to date:

I’m currently working on the 8th chapter, Serengeti and Meatballs. I occasionally post an installment but not on a regular schedule.

Each chapter features stand-alone comics and episodic stories of varying lengths. As the series went on, in addition to using color, I transitioned from only single-row strips to some larger comics, and the stories became more involved. The archive can be easily navigated on the Index Page.

I did, in fact, author an unpublished “chapter” of sorts, after the very early drawing of E&A and preceding E&A Classic by a year. I call it the E&A Renaissance of 2001, or E&A Ren. I chose to redo all the Ren stories in E&A Classic when I first turned E&A into a web series. Years later, I began posting them during E&A Forever. And Ren played a big part in E&A Destiny, which is all one long narrative and a culminating point for the ongoing events of the whole series.

The series takes place in the fictional Serengeti City, in a world populated by anthropomorphic animals. It began with only the title characters, but the Web Series introduced four more main characters, as well as a few recurring faces. Here is a little overview of the main cast of six:

An elephant, a chef, and a wonderful man! Since 2002, he’s been working as a chef in Pang’s Restaurant. He is an imaginative fellow and some of the E&A stories are Elo’s dreams. Elo was the drummer in his band, Frosted Frumpet, which was active for a large chunk of the series.

Anson is an ant, and Elo’s best friend. For most of the series, Anson is Elo’s housemate, works at a huge corporation called AfriCo, and plays the guitar in Frosted Frumpet.

The bassist and frontman for Frumpet, Todd is a music snob of a toad who can be also be seen working at a used record store and going to community college.

Bernie is a barber serving Elo and other large mammals who need a good grooming. But not least of all he is the self-proclaimed greatest “Juicie” (or juice connoisseur) the world has ever known. He would want you to know that he’s great in many other ways, too.

Haps hippo who owns and operates Hapgood’s Juice Bar, which is co-owned by Bernie and frequented by Elo and Anson. Haps has a shady past, but you’ll meet no one nicer. Bernie believes him to be the greatest Juicer of all time, and was the one who encouraged him to go pro, backing the plan with his own, hard-earned money.

A panda, and immigrant from China. He owns the Chinese restaurant “Pang’s,” and is lucky enough to have Elo as his chef and only employee.

The other characters include:

The villainous duo Scaphio and Phantis — a beetle and an elephant, respectively (but not respectably).

A music mogul and high school friend of Elo and Anson’s named Annie Myrm — an ant.

A mighty pirate that exists in Elo’s dreams (and other planes of reality), Captain Jollygut — an elephant seal.